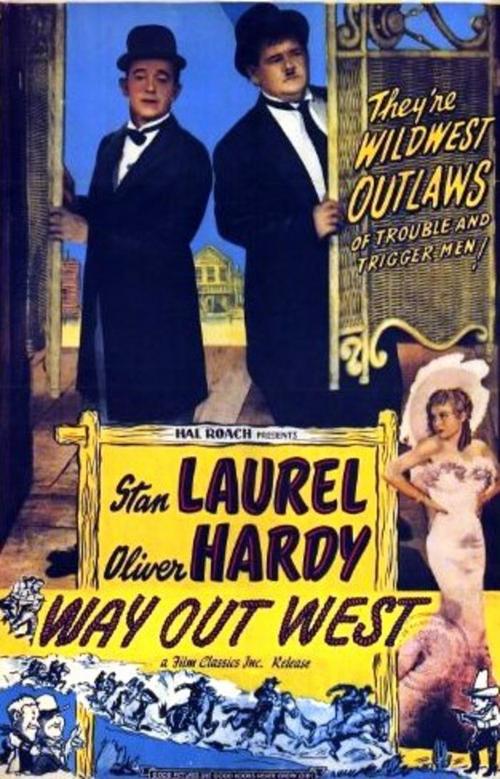 Stan and Ollie are hired to deliver the deed to a gold mine to the daughter of a dead prospector, only to be fleeced out of the document by a crooked saloon owner.
In 1937 Laurel and Hardy were at the top of their professional arc. In a few years they would leave Hal Roach for Twentieth Century Fox and MGM and the quality of their output would dwindle. Their sound features for Roach resulted in at least two certifiable classics, Sons of the Desert (1933) and Way Out West, and a dozen hits and misses, all enjoyable.

Critics and fans will forever be divided over which of the two films is their all-time best. Sons of the Desert was the genesis of a long lived fan club of that name which set up tents all around the country devoted to showing their movies and honoring the comedy duo.

As a personal choice, I prefer Way Out West. Not only does it showcase four musical numbers, three with L&H, but it provides James Finlayson with the role of his career as Mickey Finn, the nefarious saloon keeper who absconds with the deed.

James Finlayson was an indispensable asset for Laurel and Hardy, a live action Yosemite Sam. The wily Finn discovers that the cash register is operating backwards. Each press of the $1 key shows only a .10 sale. “Hey! This isn’t working right,” he complains to the bar tender. “It’s working all right for me,” the bar tender shoots back, eliciting a double take from Finn. The Scottish actor was born in 1887 and quickly established himself as a comic foil on the silent screen. Roach and Laurel instantly realized his value and he worked frequently for them from 1923 almost until his death in 1953. Finlayson’s famous exasperated “d’oh” became a trademark of Homer Simpson on the tv show three decades later. 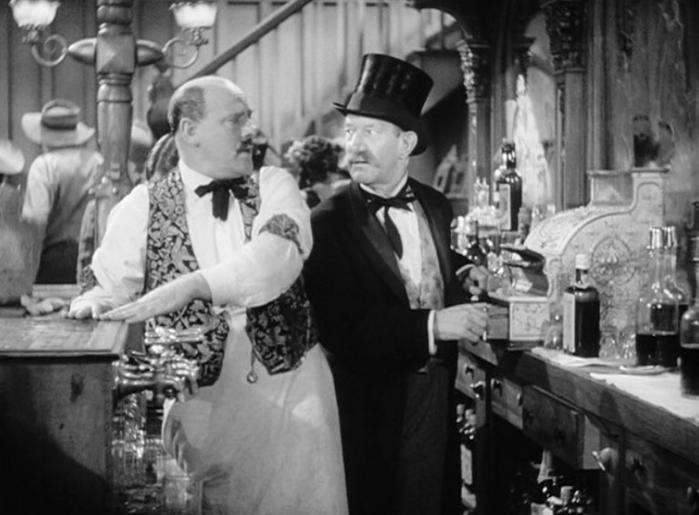 Hardy breaks the fourth wall and looks to us for sympathy. It was a frequent plea that he used effectively throughout his career. Oliver Hardy was born in Georgia in 1892. By the age of eight, he was performing with minstrel shows. For a time, he operated a movie theatre before joining the movies in 1913. He appeared in dozens of short films over the next decade and was the Tin Man in Larry Semon’s production of The Wizard of Oz in 1925. Lucky Dog (1917) was the first screen appearance of Laurel and Hardy together, although they were not working as a team. That did not occur until 45 Minutes from Hollywood (1926) and the rest is movie comedy history. After the teaming, Hardy appeared in only a few features without Laurel, including Zenobia with Harry Langdon (1939), The Fighting Kentuckian with John Wayne (1949) and in a cameo in Riding High (1950). He died of a cerebral thrombosis in Hollywood in 1957. 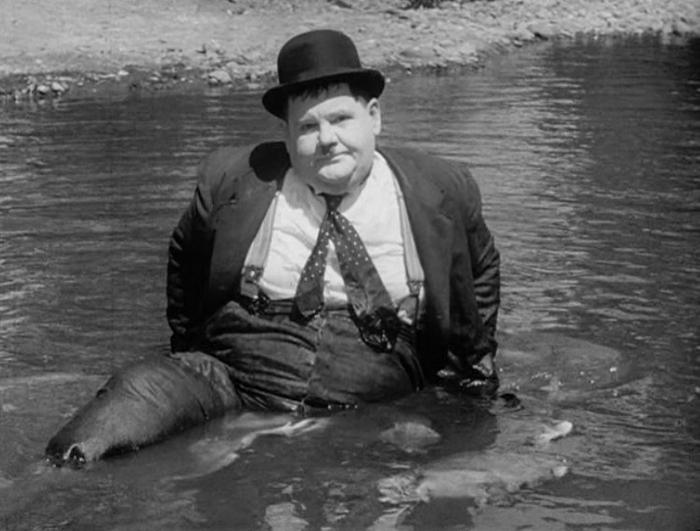 Stan Laurel was born Arthur Stanley Jefferson in Lancashire, England in 1890 and made his stage debut at the age of 16. He made two trips to the U.S. in 1910 and 1913 with Fred Karno’s vaudeville company, as the understudy of Charlie Chaplin. By 1917 he had become a permanent resident of the United States and made his screen debut, a two-reel comedy, Nuts In May. Where Hardy was content as an actor, Laurel was driven to be the powerhouse behind the camera, often as writer, director and producer. His later films with Roach were made under the banner A Stan Laurel Production. As they aged, Hardy was able to maintain an aura of genteel grace, but Laurel’s simpleton character depended upon a youthful presence for its success. That and changing audience tastes ended their careers by 1950. Stan Laurel lived long enough to see a resurgence of interest in their work. He died of a heart attack in Santa Monica, CA, in 1965.

The most famous of their musical interludes, At the Ball, That’s All, performed by the Avalon Boys and danced to perfection by L&H. For such a heavy man, Hardy was amazingly agile on his feet and Laurel’s wiry frame accommodated his eccentric dancing. The routine was performed by Steve Coogan and John C. Reilly as an affectionate tribute at the conclusion of Stan and Ollie, a mostly fictionalized account of their visit to England in the mid-fifties. 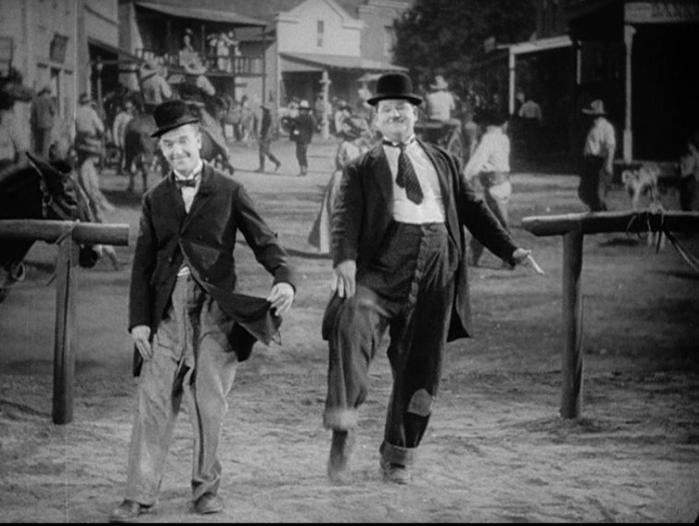 After Laurel spills the beans about the map to Mickey Finn the reprobate rushes upstairs to tell his paramour (to put it nicely) Lola. Together, they cook up a scheme in which she will impersonate Mary.

The boys are introduced to the fictional “Mary.”
Lola: Tell me about my dear daddy! Is he really dead?
Stan: Well, we hope so. They buried him.

Thinking they have fulfilled their obligation, Stan and Ollie stop at the bar for a drink and their second musical interlude, The Trail of the Lonesome Pine. Hardy had a beautiful singing voice and used it occasionally in their features. It’s a shame the duo never cut an album of songs, a missed opportunity for their fans and the history of Hollywood’s classic period. Chill Wills does Stan’s deep voice and Rosina Lawrence is behind the higher register. This number was also included in Stan and Ollie (2018). 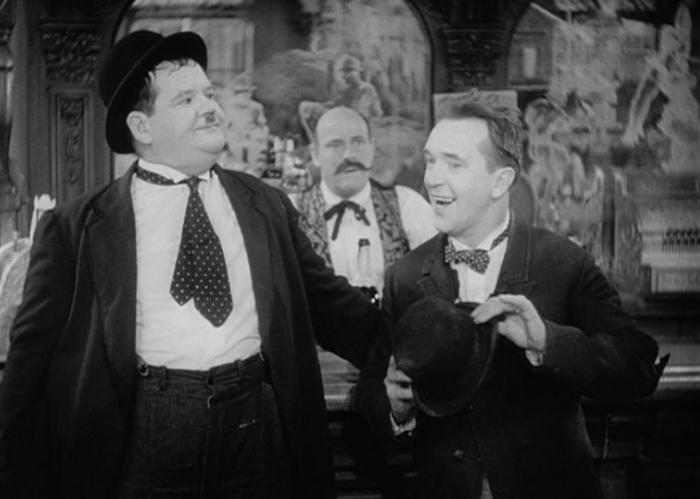 When the boys discover the real Mary Roberts (Rosina Lawrence) they confront Finn and Lola, demanding the return the deed to its rightful owner. In the ensuing skirmish, Hardy uses Finn’s tie to literally lift him off the floor. The L&H movies, particularly their two-reel shorts, could become extremely violent, often resulting in the destruction of automobiles and buildings or crowds of people fighting over something as inconsequential as a slight word. But it was always cartoon violence and no matter what level of mayhem occurred, everyone walked away basically unscathed.

After losing the map again, Stan and Ollie break into the saloon at night to retrieve it. When Stan tries to free Ollie from a trap door that has fallen on his head, Hardy’s neck is impossibly stretched and snaps back into position like a bungee cord. Some of their gags involved an almost expressionistic warping of the human frame. At the conclusion of The Bohemian Girl they emerge from a torture chamber with Hardy’s body squeezed to half his normal size and Stan elongated like a strand of spaghetti. No other comedy team of their era went to such great lengths to stretch a realistic situation to the breaking point.

The greatest laughing scene ever put on film. Lola tries to retrieve the map that a ticklish Stan has hidden on his person. The prolonged fight and Stan’s laughter is infectious. Sharon Lynn found it difficult to keep a straight face while filming. Although she tries to hide it, there is a slight smile on her lips throughout the sequence. 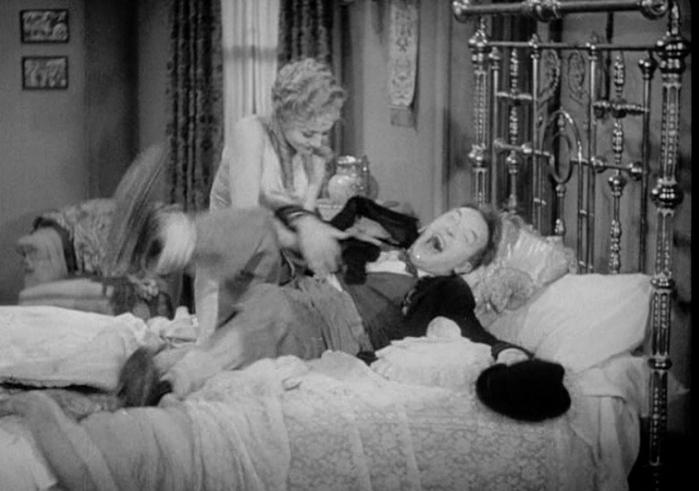 Hardy gets the deed and Finn gets his comeuppance, hog tied and hung from a chandelier. Take note of Stan in the doorway with Dinah the mule. If you haven’t seen the movie but wonder how they got that mule to the second floor of Finn’s saloon, I’m not giving away the secret. 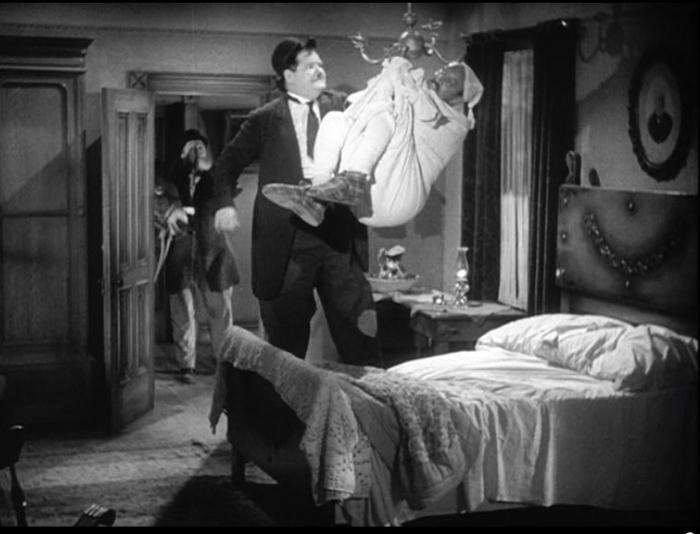 I Want to Be in Dixie is the last of their musical numbers. Other comedy teams included such interludes in their features. Each of the Marx Bros had a specialty, Hope and Crosby sang, Abbott and Costello, not musically gifted, left the numbers to their co-stars. None of them, however, were so endearingly delivered as Laurel and Hardy (two minds without a single thought) who are more appreciated and loved by their fans today than they ever were when they were alive.

Thanx for all the laughs, Stan, Ollie and Finn, wherever you are.
And This, Too, Shall Pass Away

Schrodinger's cat walks into a bar, and doesn't.

This message has been deleted.
▲ Top